Room tuning using IIR filters commonly involves taking live, continuous measurements while adjusting processor settings. Alternatively, it can be an iterative process of measuring and filter adjustment. FIR Designer’s ‘IIR Filters’ capability (with branded IIR filter emulation) is a powerful and convenient tool for room tuning, automating much of the iterative process & vastly reducing the time that it takes to achieve an optimally tuned system.

This case study provides a walk-through using FIR Designer to tune a system using only IIRs.

An Australian church recently completed a major building renovation that included significant upgrades to some elements of the audio and visual systems.

To minimize costs, certain existing elements of the audio – including the FOH loudspeakers – were retained, resulting in a combination of old & new equipment.

Physical changes to the main auditorium required repositioning the four existing main FOH loudspeakers into two clusters; each providing coverage to half the room. Seats roughly in the centre-line of the room would experience some overlapping coverage and some stereo effect. 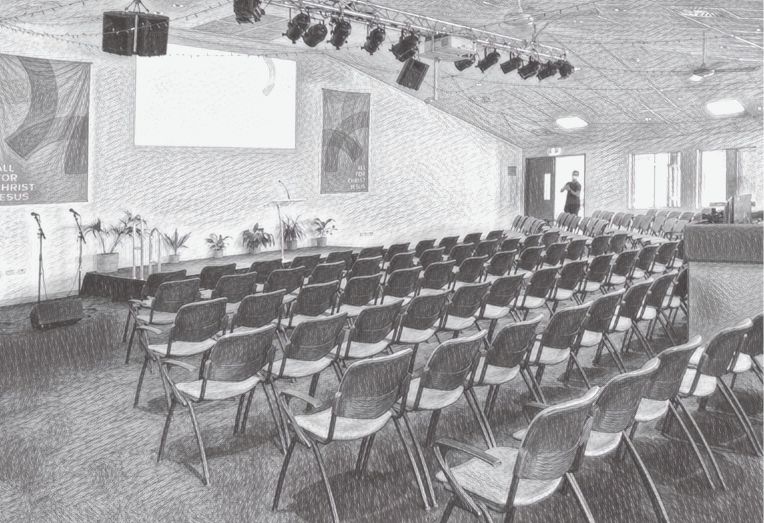 IIR filter sets for the amplifier DSP were created with FIR Designer using averages of loudspeaker measurements taken throughout the seating area.

The left and right halves of the room were measured separately. In each half, both loudspeakers in the cluster were on. Twelve transfer-function measurements – using Rational Acoustics SMAART® v8 – were taken in various seating locations in each half, at approximately 1.2 m (4 ft) above the ground.

The left-side SMAART® TRF measurements were loaded into the ‘Measurement Averaging’ tab of FIR Designer, by choosing ‘Load and Setup’, then ‘Select Directory.’

Measurements can also be captured live from Rational Acoustics SMAART® over a local network using FIR Designer’s SMAART Control feature. Multiple, captured measurements can then be pushed to the ‘Measurement Averaging’ tab.

Since the measurements were all close to normalised (near 0 dB) already, ‘Apply common offset (dB)’ of 0 dB was entered and all measurement timed aligned to the reference measurement; which, by default, is the 1st measurement in the list.

Note: Time alignment wasn’t actually necessary for this averaging since the power averaging mode was used (on the next tab).

(The lower plot can show either magnitude/phase, or the impulse response – see below.)

In the image below, ‘Power (minimum phase)’ averaging is selected. (The minimum phase response is calculated from the power-averaged magnitude response using standard, known methods.) The lower plot shows the average of the twelve measurements.

Next, the ‘Copy Averaged IR to : Import Tab’ was used to copy the averaged measurement into FIR Designer’s main workflow.

In the ‘Import’ tab, the new, averaged measurement was raised by 10 dB to bring the pass-band close to 0 dB. (This helps in the subsequent steps or tabs of the workflow.) Also a little frequency smoothing – 12th octave – was applied.

On the ‘IIR Filters’ tab there are several IIR filter modes to choose from which emulate brand-specific IIR filter behavior. Here the “QSC Q-SYS” IIR mode was selected since filters in this mode match those in the QSC PLD 4.3.

The QSC PLD amplifiers have high-pass & low-pass crossover filters and five parametric filters on each channel. The picture below shows one high-pass filter and five parametric filters adjusted to bring the averaged measurement close to the target response. The filter settings were then manually copied from FIR Designer into the PLD 4.3’s channels A and B (via front panel entry), which were driving the left cluster.

The following picture shows the right side averaged measurement on the ‘Import’ tab of the workflow.

Below are the five parametric filters used to bring the right side close to the target response. These filters and the high-pass filter were also manually copied into the PLD 4.3, this time into channels C and D, which were driving the right cluster.

The entire FIR Designer process – loading and averaging measurements, setting the target response, designing the IIR filtering and copying the filters into the PLD 4.3 amplifier – only took about 15 minutes. (Limiters were also set on each amplifier channel.) Since FIR Designer immediately shows the effect of filtering, there was/is no need to re-measure the room.

Listening is often subjective, but overall the system sounded clearer, more timbrally balanced and gain-before-feedback was improved – particular for the lecturn microphone almost directly under the loudspeaker hangs.

When FIR-capable amplifiers & processors are involved, room tuning can be optimized further by using the same loudspeaker measurements to develop custom FIR filters, in addition to IIR processing. This involves following the FIR Designer workflow through the five additional FIR-focused tabs, then using the ‘Export’ tab to generate a FIR filter (or complete mixed FIR+IIR preset) in whatever file format is required for the brand of processor being used.