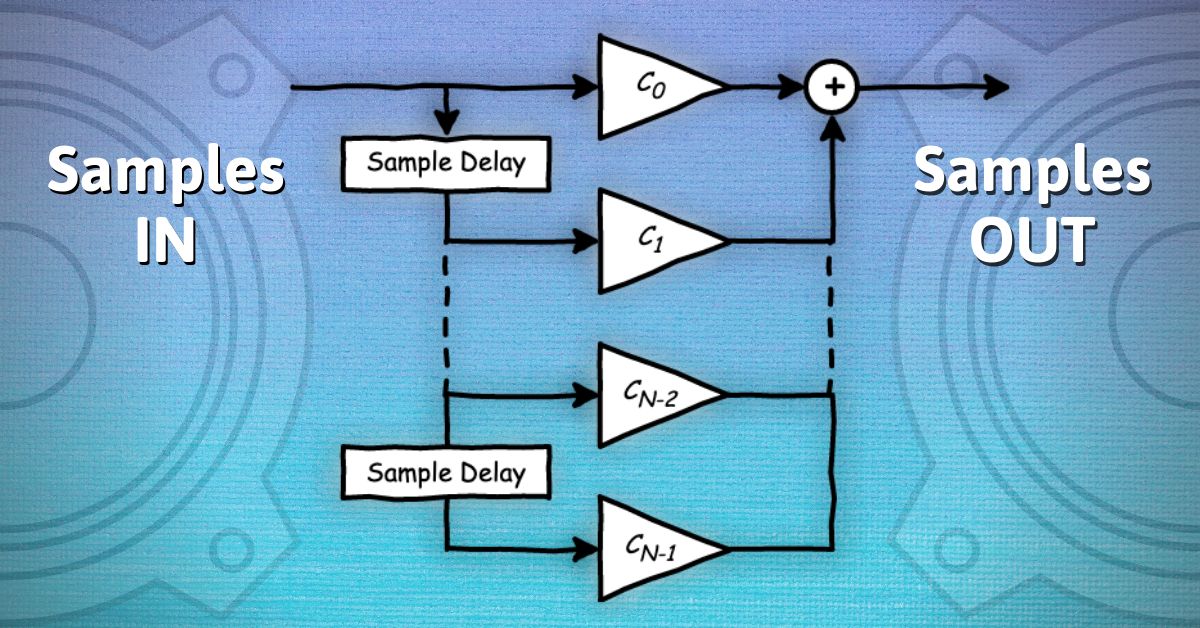 A Guide to Fundamental FIR Filter Concepts & Applications in Loudspeakers

Although not a new technology, manufacturers are increasingly including FIR (finite impulse response) filtering in loudspeaker processors and DSP based amplifiers due to the significant increase in performance-versus-cost of microprocessors and DSP hardware.

In part 1 we introduced basic digital audio concepts, the FIR filter and compared IIR & FIR filters in terms of EQ performance and impulse response length. Here in part 2, we continue the comparison considering computational complexity and the key benefits of FIR filters.

In the introduction we mentioned that FIR filters are more computationally costly than IIR filters. Let’s consider some of the simple IIR and FIR filters shown above. When estimating and comparing computational costs, we generally look at the mathematical operations – multiplications and additions. We assume that a processor can calculate a “multiply” and an “add”  effectively in the same operation; and therefore we can ignore the additions and just count and compare the multiplications.

The following table compares the filters from above.

We’ve seen in the examples how approximately 40 taps or more are needed for the FIR filters to approximate the IIR filters, and the table shows that this comes at the computational cost of 8 times or 13.3 times that of the IIR.

As at the writing of this article, a common high-end speaker processor has approximately 24 IIR biquads for high-pass (HP), low-pass (LP), shelf and parametric filters, and 2048 taps of FIR. The following table compares the computational cost of both.

If FIR filtering is so computationally costly, what are its advantages? There are two primary benefits:

Let’s explore each of these further.

Independent Control of Magnitude and Phase

Previously we showed how both IIR and FIR filters use sample delays (as well as coefficients) to achieve their intended changes in the frequency response. A minimum-phase filter effects EQ whilst adding the least amount of delay to the audio signal. (This is one of the reasons long FIR filter based EQ in PA systems is typically minimum-phase.) A characteristic of a minimum-phase filter is that its impulse response has larger coefficients at or near the start of the impulse response. The following two plots shows a minimum phase FIR filter that effects a HP near 100 Hz and some EQ. Whilst the FIR filter length is 42.7 ms, the effective delay is negligible.

The following two plots show a FIR filter with the same magnitude response but with a flat or linear phase. The bulk delay through the filter is equivalent to the peak location of the filter: here 1024 samples or 21.3 ms.

Finally we have an arbitrary phase or mixed-phase FIR filter with the same frequency response. The bulk delay through the filter is approximately the location of the filter peak; here ~1480 samples or 30.4 ms. Where the peak is placed depends on the desired characteristics of the FIR filter and how those characteristics can be achieved within the tap length limit; here 2048 taps. To better understand this, take a look at some of the FIR Designer tutorials.

Why do we care about mixed-phase behaviour? So we can push a loudspeaker’s phase to where we want it!

Why is Independent Phase Control Useful?

Since minimum-phase EQ generally doesn’t affect the all-pass behaviour, we can use FIR filtering to move the phase of the loudspeaker to where we want it.

Arbitrary phase manipulation has many applications including;

The following four plots show an on-axis measurement of a commercial 12″ + horn 2-way cabinet and a 2048 tap FIR filter created to push the cabinet’s response to have a relatively flat magnitude response (with a slight HF roll-off) and flat phase in the pass-band.

The following plots show an example of using a FIR filter to both EQ a subwoofer and unwrap the low-frequency phase (from the cabinet and the high-pass IIR used to protect against over-displacement).

Filtering at very low frequencies requires very long filters; here 5000 taps with an IR peak delay of 3500 taps or 72.9ms. (This is simply an example of what a FIR filter can do and it’s yet to be tested whether the reduction in low-frequency group delay improves the perceived sub impact. With such a large delay, it’s probably not useful for live applications but may be useful in cinema and home theatre applications.)

The growing awareness of the benefits and flexibility of FIR filtering in audio, combined with the ever-increasing performance-versus-cost of microprocessors and DSPs, has resulted in increasing numbers of audio products with user-accessible FIR filtering blocks. These products enable loudspeaker designers, installers, system operators and DIY’ers to load custom FIR filters. See a list of FIR-capable processors, amplifiers & software products.

Software tools like FIR Designer* enable the design and simulation of FIR based EQ and mixed IIR+FIR presets/tunings for loudspeakers and systems, from loudspeaker or system measurements. Comprehensive measurement averaging functionality for spatial and level averaging is also included.

Written by Michael John, founder of Eclipse Audio. | Download this article as a PDF file.

* All the FIR filter examples and plots in this document were generated with FIR Designer.